Where is the treasure trove? 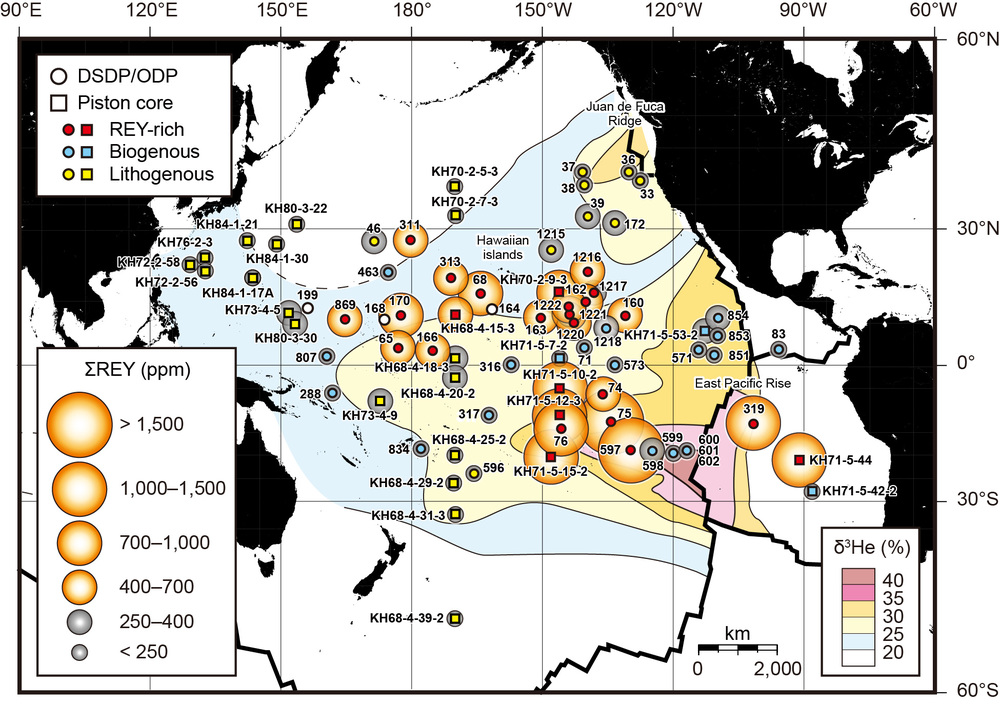 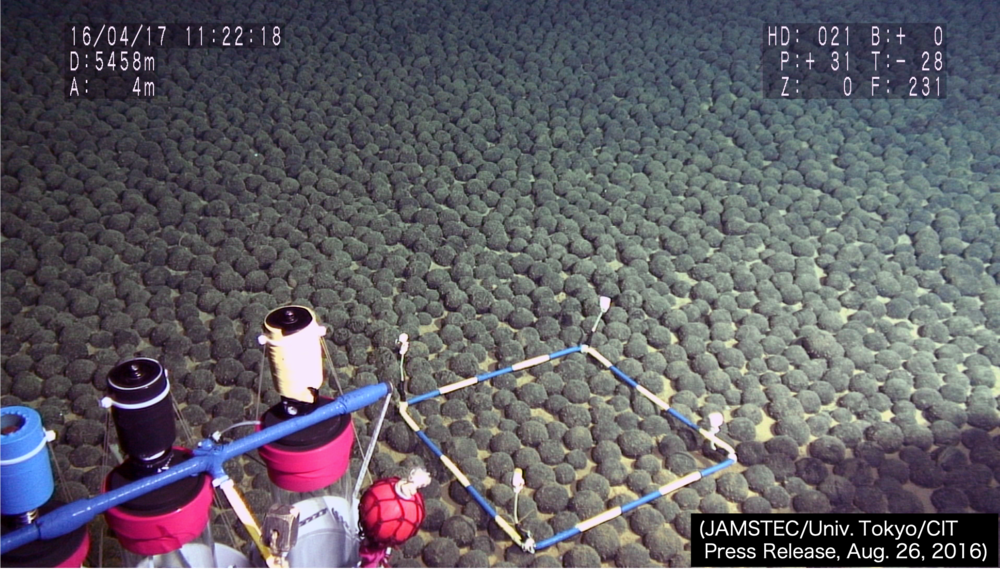 Modern high-tech industries rely on a variety of industrially critical metals, including rare earth elements (REEs) and cobalt (Co). These metals are essential in technology related to renewable energy, large-capacity secondary batteries, and so on. Thus, these metals are now even more important not only as raw materials but also in the production and storage of energy. Because of their increasing importance, we are conducting research targeting both land and ocean to clarify where to find these critical metals.

How are mineral resources formed? 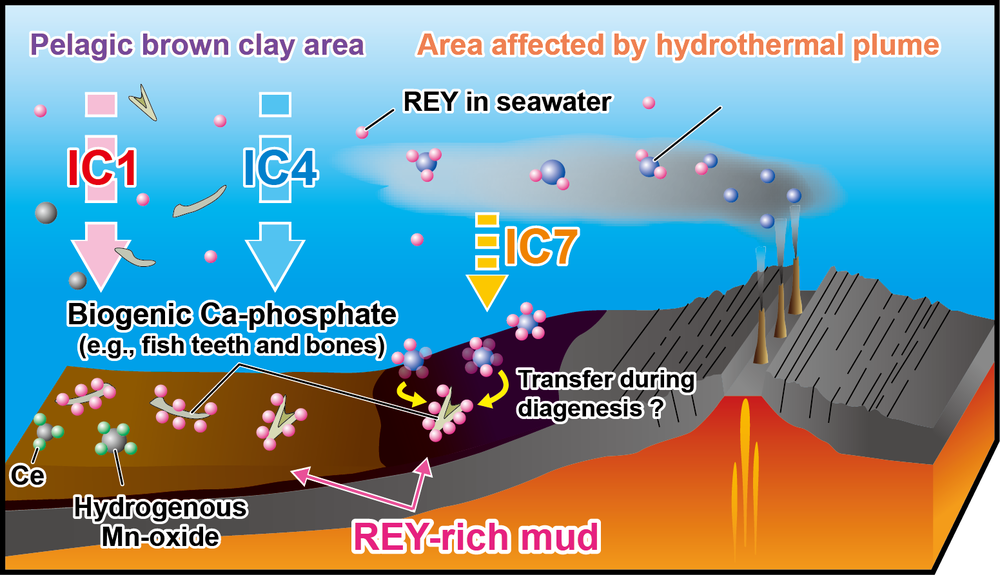 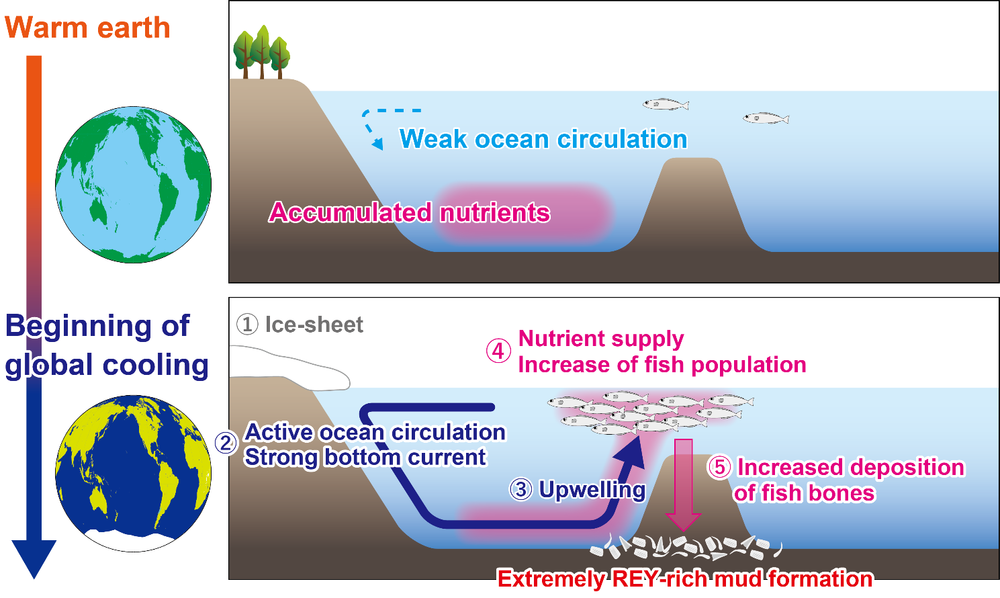 Human societies have developed dramatically by utilizing natural concentrates of useful elements and compounds (i.e., “resources”). How did such resources form in nature? What substances and physicochemical processes are involved? Deciphering the causes of ore genesis and narrowing down the areas that satisfy the environmental conditions for resource formation will provide us with important guidelines for finding new resources and/or deposits.

Towards the development of novel resources 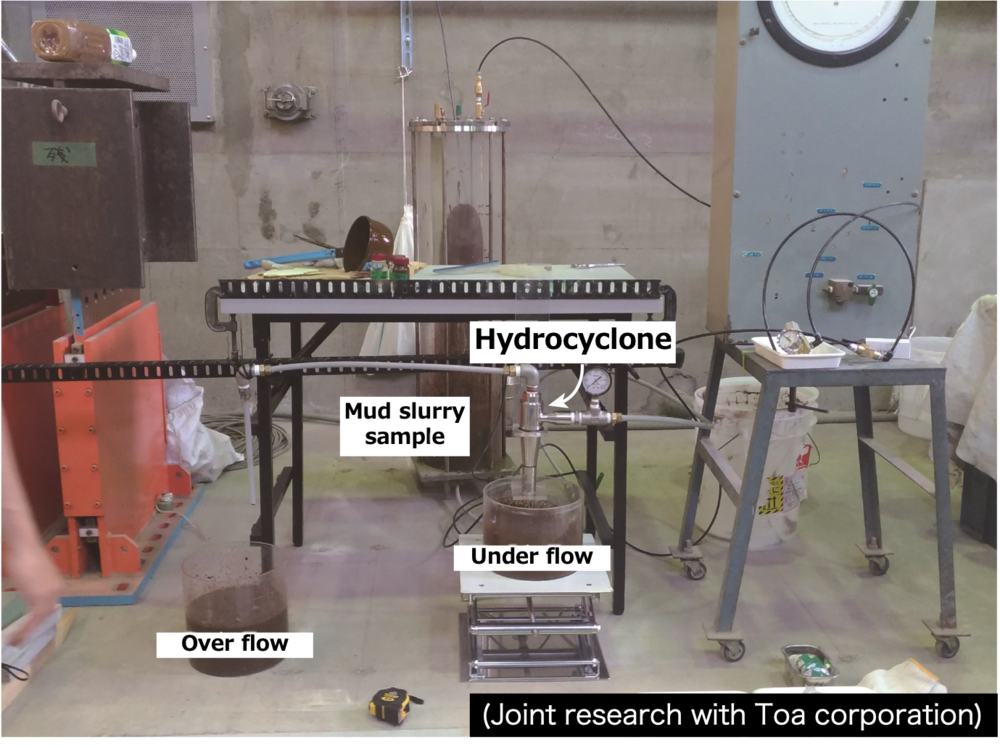 Seafloor mineral resources, including REY-rich mud, ferromanganese nodules and crusts, and hydrothermal sulfides, have attracted our attention as novel sources of various metals that are critical in modern society. These frontier resources have not yet been fully explored, and the establishment of exploration methods and development techniques for promising resources (including mining, beneficiation, and smelting) is an important area where countries are fiercely competing. We are approaching these extremely important global issues by conducting high-precision chemical analyses and other related experimental investigations. 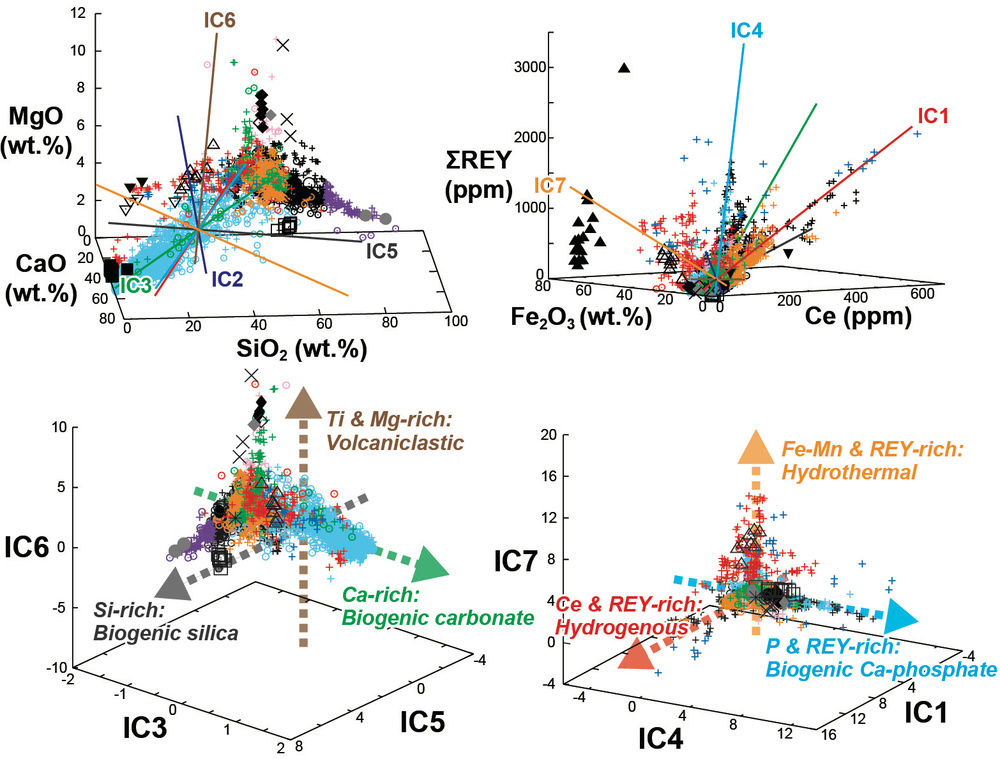 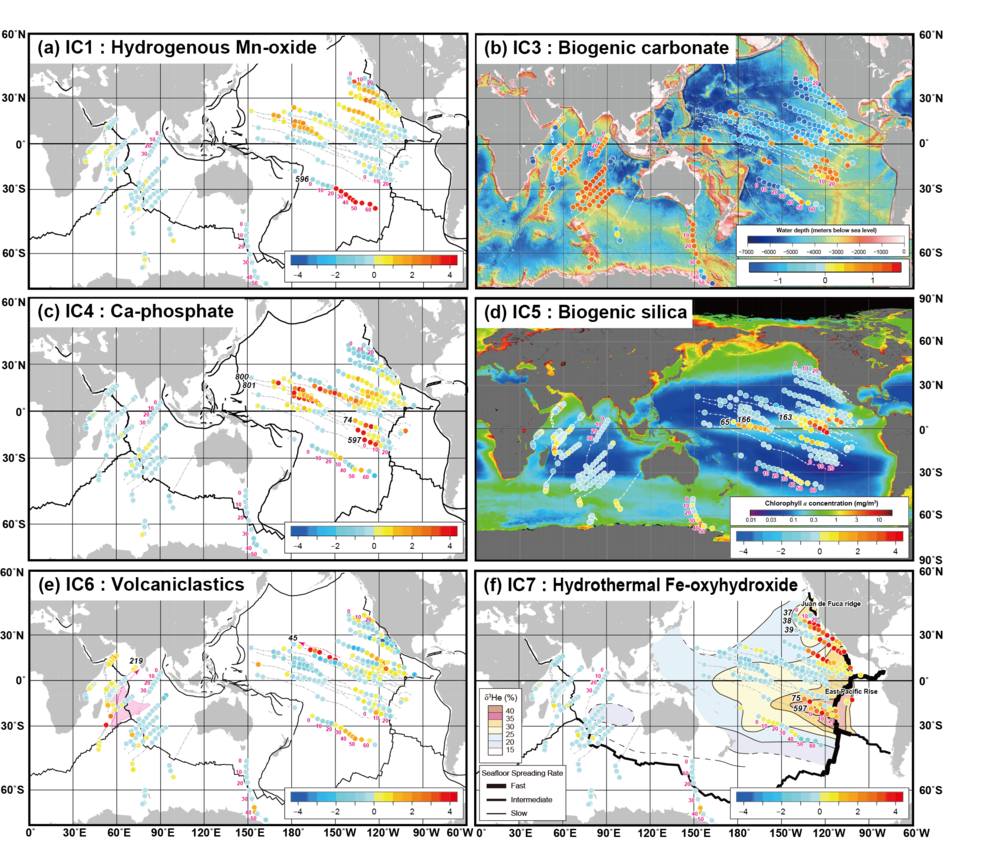 Recent advancements in data science have been remarkable, and the application of data science in various fields is increasing, including in the analysis of geochemical data. Using data scientific approaches such as multivariate analyses, we are investigating the mechanisms of resource formation and tracing environmental changes in multi-element geochemical data obtained in our high-precision chemical analyses.

Mechanisms and effects of climate change 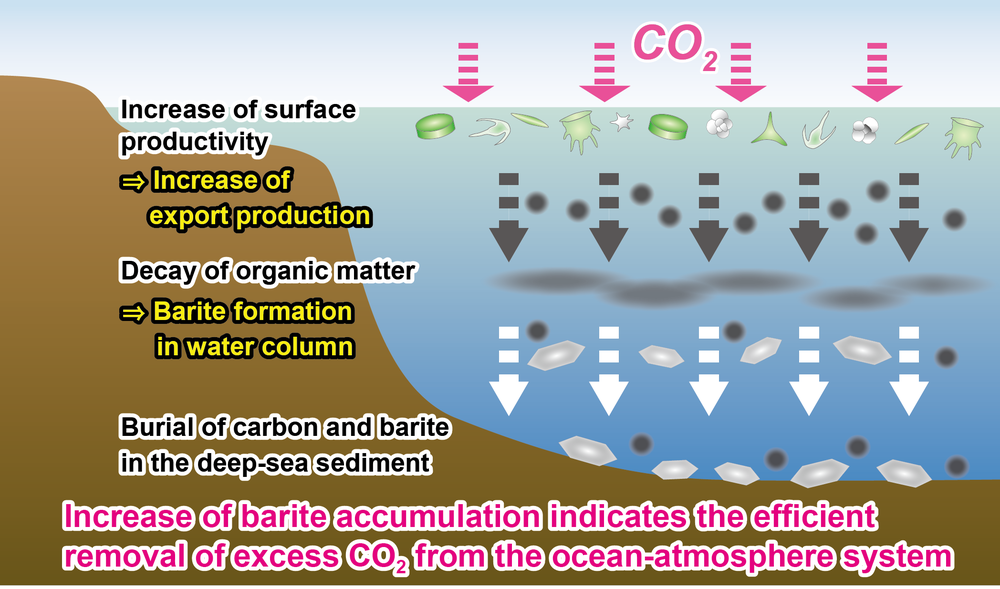 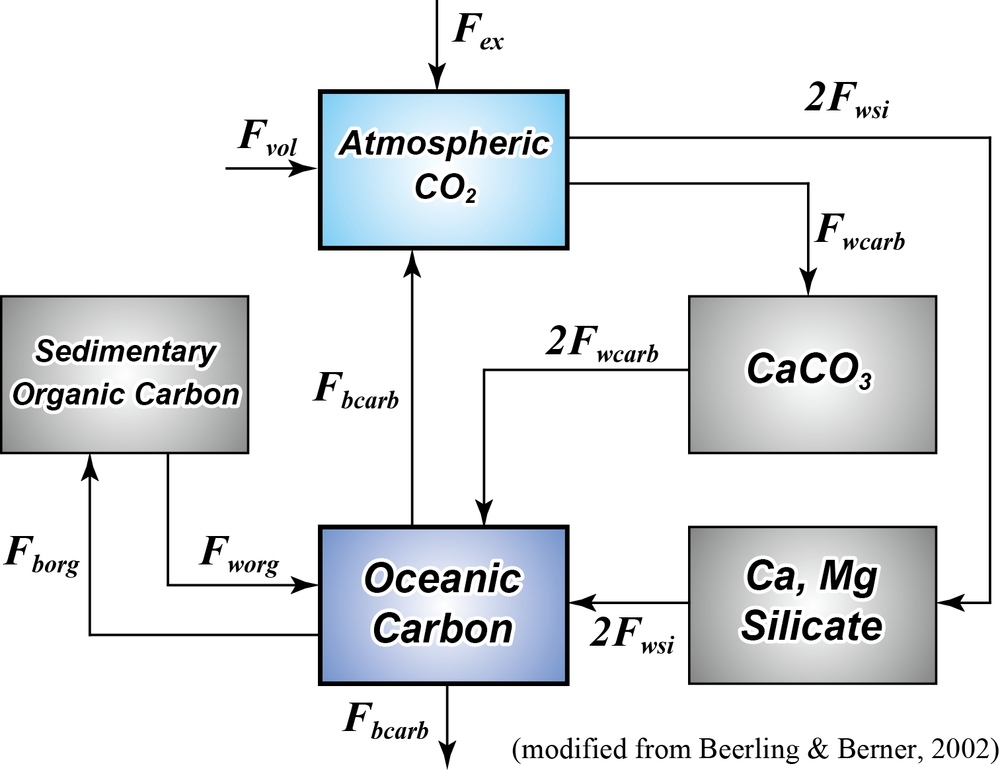 Climate change, or global warming, is one of the urgent issues facing human society. We aim to clarify the long-term effects of the carbon emissions that are associated with human activities on the global environment. To this end, we conduct chemical analyses and data analyses of geological samples that record information about an ancient and much hotter Earth as well as numerical simulations of elemental cycles in Earth’s surficial systems. These analyses could provide important guidance on future mitigation and adaptation measures to address ongoing climate change. We have also investigated the possibility of fixing carbon dioxide in carbonate minerals (i.e., removing it from the atmosphere) as a specific countermeasure against global warming. 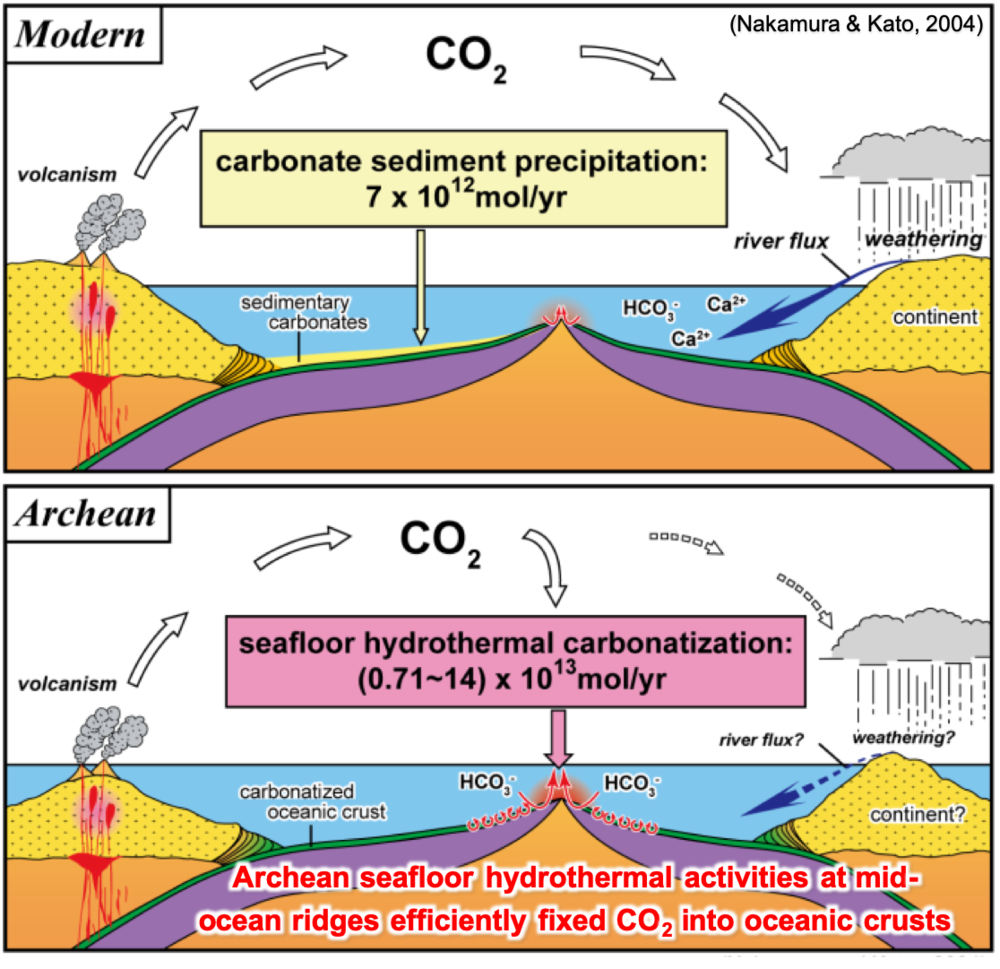 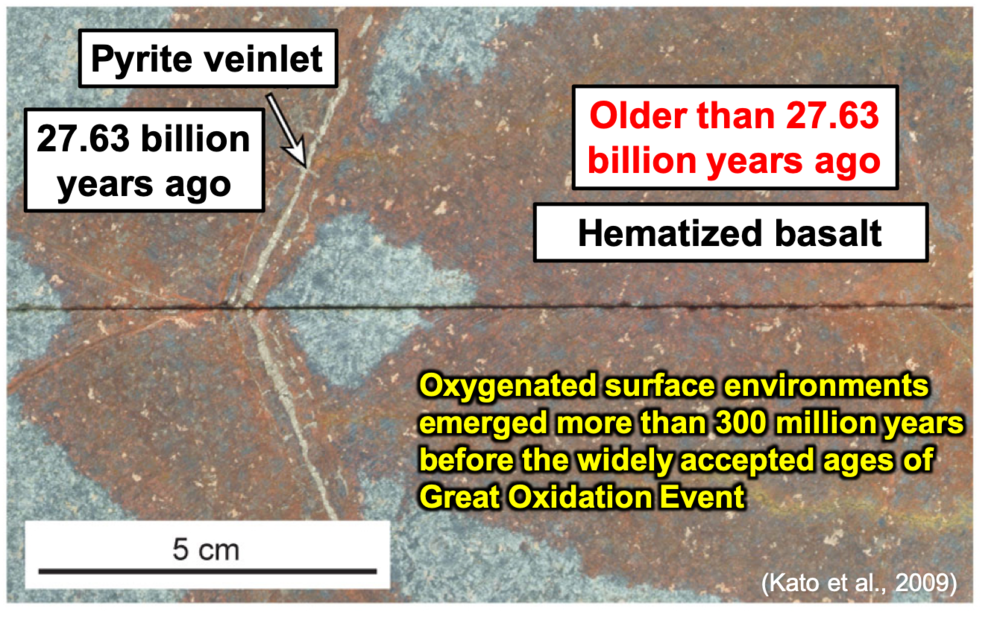 Our ultimate goal is to elucidate how Earth’s surface environment has changed over the 4.6 billion years since its birth. By deciphering geochemical evidence (e.g., trace element concentrations and Sr and Os isotopes) left in sediments or sedimentary rocks deposited on Earth’s surface, we are investigating the chemical reactions and associated material balance between seawater and volcanic rocks erupted from the seafloor. We are studying a wide range of topics from the world’s oldest geological bodies to the present-day oceans. 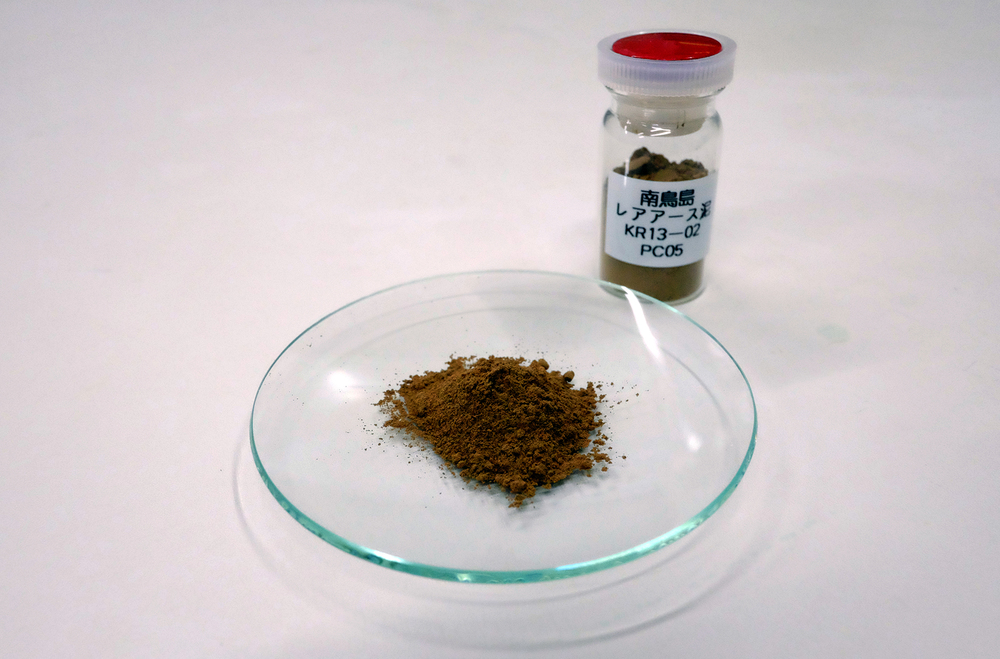 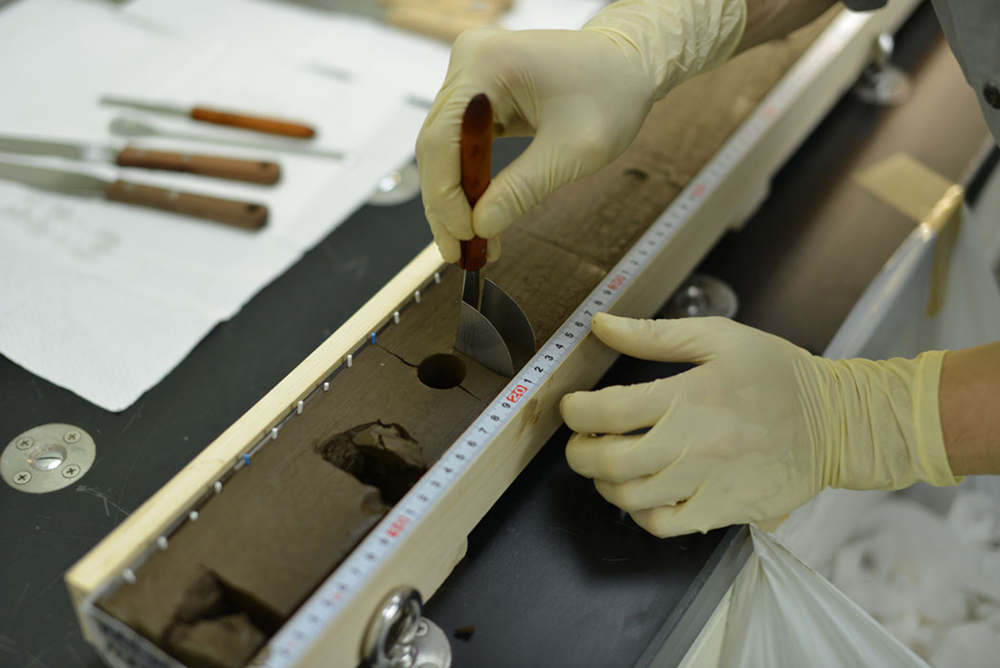 We discovered that mud deposited on the deep seafloor of the Pacific Ocean contains high concentrations of industrially essential rare earth elements (especially heavy rare earths) and have named it “rare earth elements and yttrium (REY)-rich mud”. These REY-rich mud resources are estimated to be as much as 1000 times the amount of land reserves. Furthermore, they have advantages as a mineral resource, such as the easy recovery of REY with dilute acids and a very low content of radioactive elements such as Th and U, which are obstacles to the development of onshore REY deposits. Thus, REY-rich mud is expected to be a promising rare-earth resource in the future. We have also found that the world’s highest grade REY-rich mud lies in the Japanese Exclusive Economic Zone (EEZ) surrounding Minamitorishima Island (Japan’s easternmost island). Our goal is to elucidate the formation of this deposit and establish an efficient exploration method for its development. 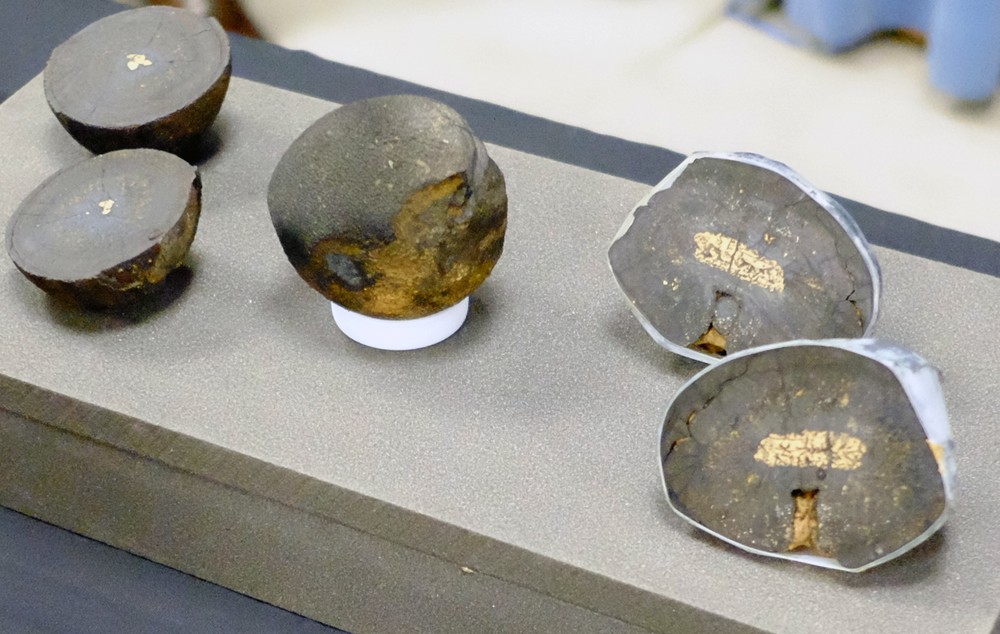 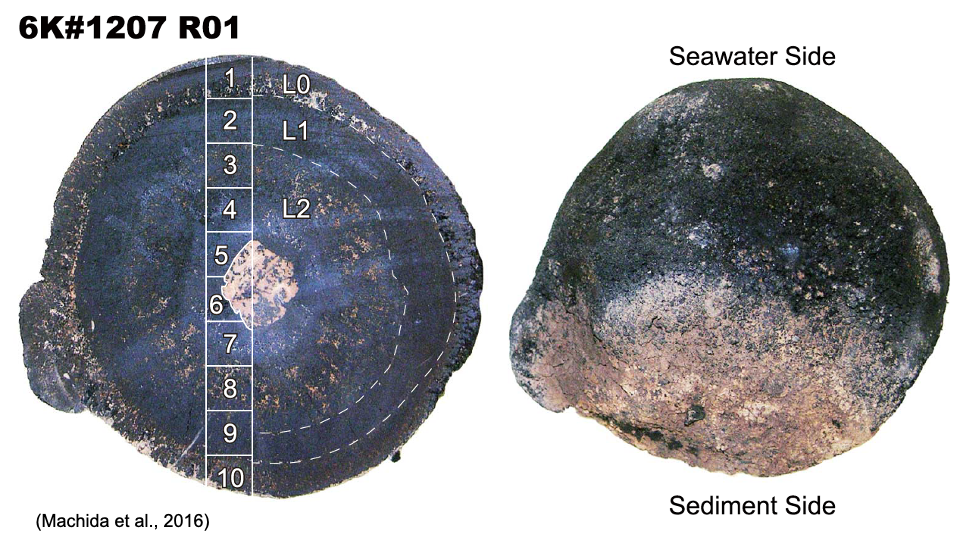 Manganese nodules are metal lumps that are about 10 cm in diameter and are widely distributed on the world’s deep seafloor. Our research group conducted a survey in 2016 with the Japan Agency for Marine-Earth Science and Technology (JAMSTEC) using the manned research submersible SHINKAI 6500 and discovered a giant Mn-nodule deposit in the EEZ around Minamitorishima. We are actively investigating the Mn-nodules to elucidate their formation processes and distribution from the perspective of future development. 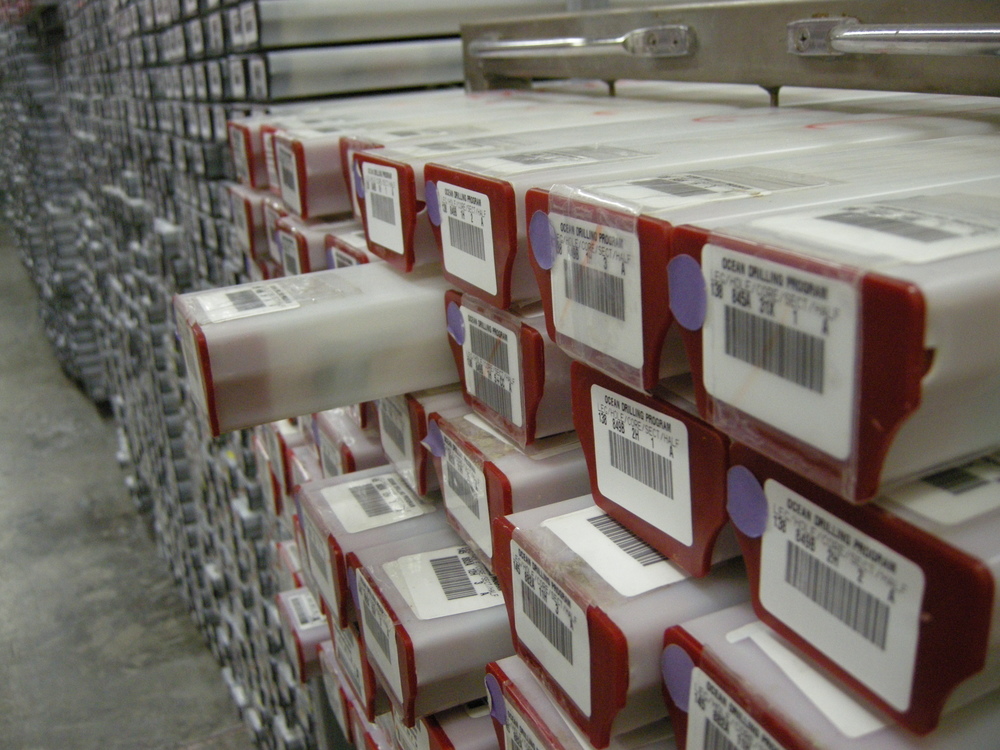 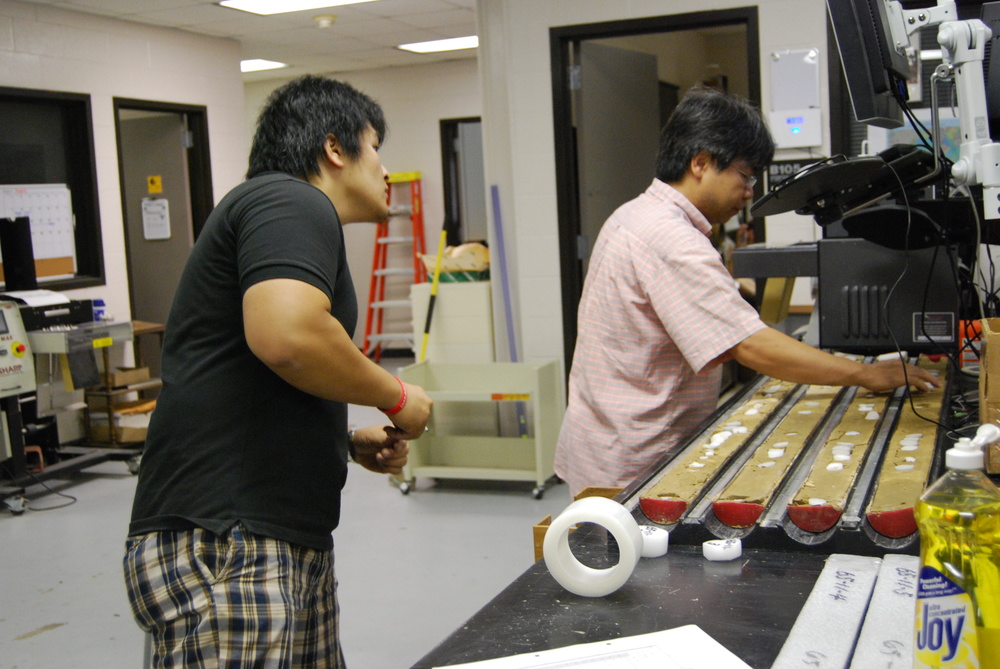 We have been conducting various studies using deep-sea sediment core samples from all over the world collected by the International Ocean Discovery Program (IODP), which is a joint project by Japan, the United States, the European Union, and other countries. Samples obtained from past drilling expeditions, including those by the Ocean Drilling Program (ODP) and Deep Sea Drilling Project (DSDP), can be provided to researchers around the world for research upon request. We have made use of these legacy samples to achieve several important research outcomes, including the discovery of REY-rich mud in the Pacific and Indian Oceans and elucidating Earth’s responses to past climate changes. 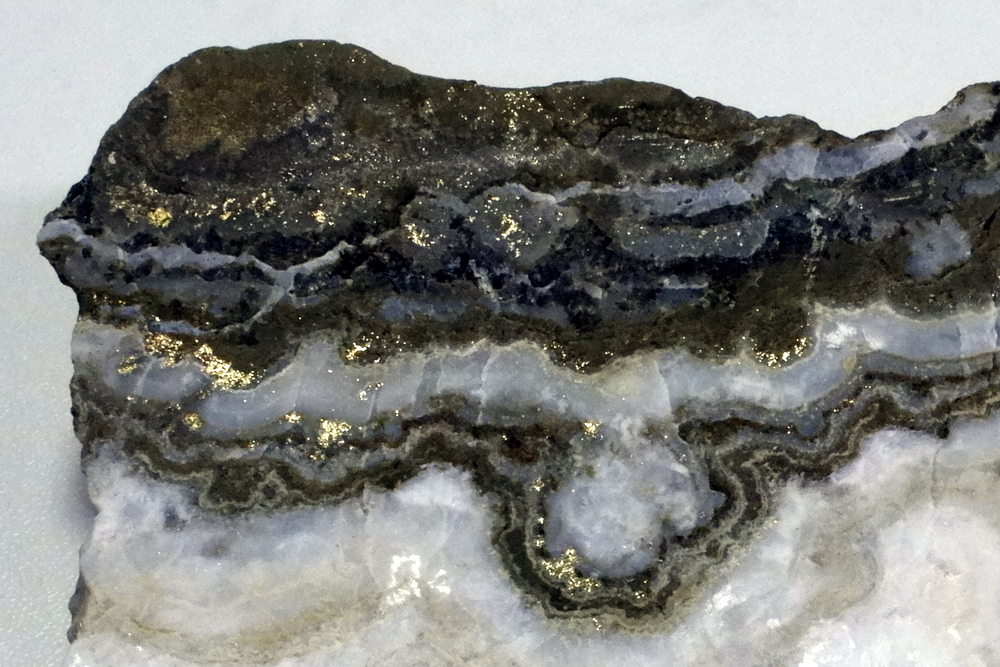 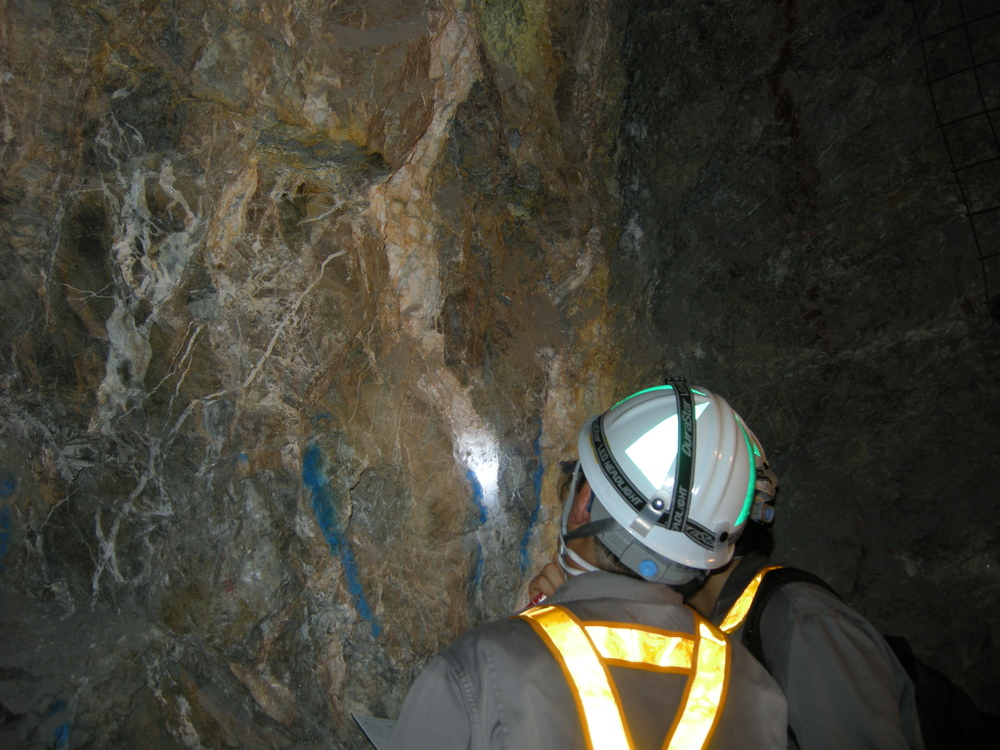 Underneath the Japanese archipelago, which is located in a subduction zone (a place where collision of tectonic plates leads to one plate “subducting” under the other), magma is constantly supplied to the surface, and mineralization processes occur through hydrothermal activity. Japanese accretionary complexes (regions of structurally complex geology related to plate collision) also contain mineral deposits that were formed in past oceans and accumulated during plate subduction. We aim to elucidate the origin of such onshore ore deposits using in-situ microanalyses and high-precision isotope analyses to establish exploration guidelines for promising deposits. We also aim to decode the history of environmental changes in the distant past that cannot be obtained from the present ocean. 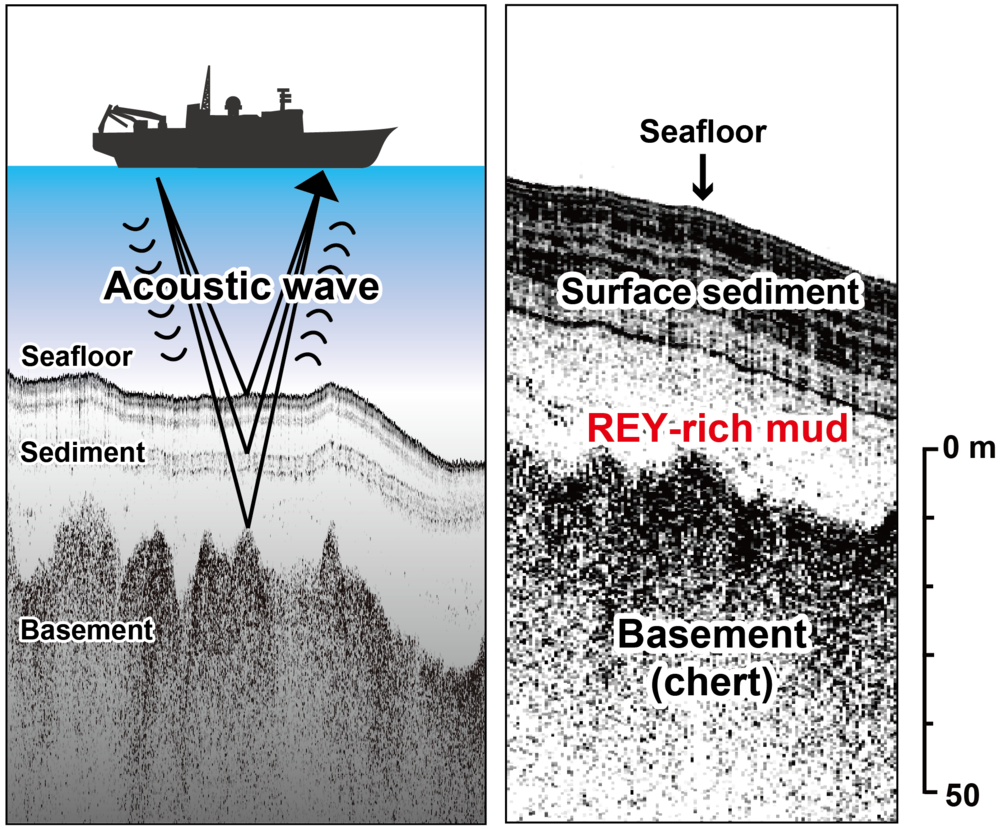 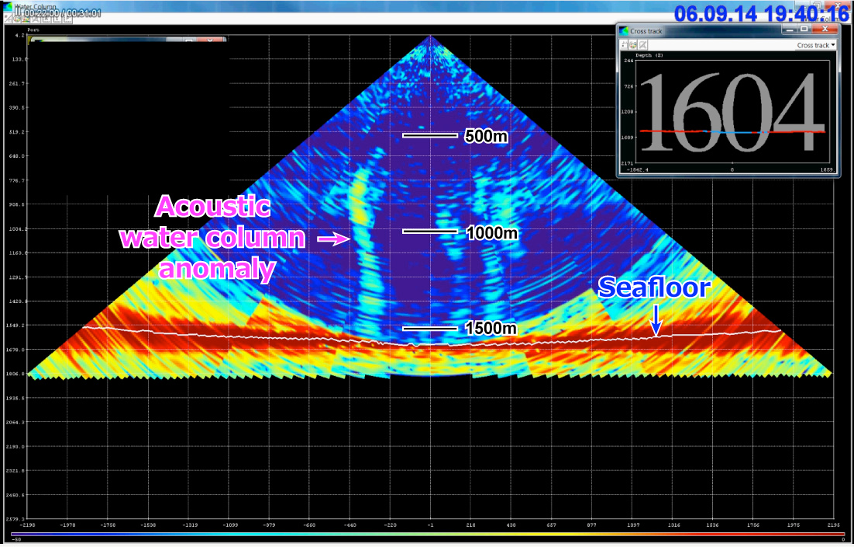 In the exploration of seafloor mineral resources, the thick wall of water from the sea surface to the floor absorbs electromagnetic waves, which poses a challenge in the use of electromagnetic methods to study these resources. An alternative is to use sound waves transmitted through the seawater medium. By capturing and analyzing the reflection of sound waves emitted from a research vessel to the seafloor, we can visualize various information directly related to the presence of mineral resources, such as the hardness of the seafloor, sedimentary structures under the seafloor, and hydrothermal plumes that cause anomalous sound velocity in the water column. We are trying to establish a novel and efficient resource exploration method by applying data science methods such as image analysis, machine learning, and deep learning to these geophysical survey data.